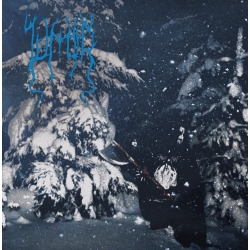 YMIR's history stretches back to the late '90s. The band originally existed as a trio of vocalist/guitarist Vrasjarn, later of funeral doomlords Profetus; drummer Lord Sargofagian, who concurrently founded the prolific Baptism; and lead guitarist Toni Pšlkki. With this lineup, YMIR released the Trollsword demo in 1999, mystical black metal firmly (and favorably) of its time. Seven more years would follow before another recording came from YMIR, as the brothers Vrasjarn and Lord Sargofagian were busy with the aforementioned bands (and many others), but the Silvery Howling demo at last arrived in 2006, courtesy of WEREWOLF, and saw the band scaled back to a duo and evincing a rawer, nastier sound whilst retaining the sweet stench of the '90s. Naturally, once again, more silence ensued...

But from the past comes the storms...of icy, grandiose, paradigmatically Finnish black metal, bearing the no-bullshit title of Ymir. As can be expected, YMIR's long-brewing debut album is both a summation of their sparse but no-less-considerable past and a strident extension into both present and future. Never before have the band sounded so invigorated, so robust and roiling in their sweepingly sumptuous ruminations; the aim may be for mystical black metal of a most mid-'90s vintage, but the palpable physicality present here puts Ymir in rarefied company, whether it's past or especially present. Suitably, YMIR create epic screeds which open portals of the imagination and ancient consciousness alike, reverent to the old ways of noble black metal faith but by no means tethered to reductive expression: simply put, YMIR are a black metal band and Ymir is a black metal record, but their collective scope is boundless, brave, and breathing deeply of an essence few are able to grasp in the nowadays scene.

Whether this self-titled album sees YMIR return to the shadows for an indeterminate / interminable amount of time remains to be seen, but its arrival is more-than-just cause for celebration. Hark, and hear this "Resurrection of the Pagan Fire"!

UNGOD - Bewitched by Sins and Lust