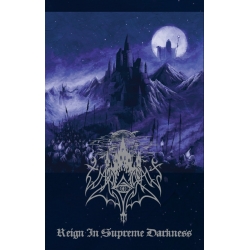 Hailing from Finland, the root of VARGRAV originated during starless nights in late 2015. Working in clandestine solitude, sole creator V-Khaoz - a prolific veteran of the Finnish black metal underground, dating back to the late '90s - soon shaped the initial vision of VARGRAV's debut album and submitted it, in demo form, to various labels. During the the summer of 2016, WEREWOLF RECORDS was immediately chosen to be the most suitable collaborator with which to work, and the sinister glow of the black flame began to burn brighter...

Alas, at the dawn of 2018 came VARGRAV's debut album, Netherstorm, and it indeed took the underground by storm, garnering rave reviews across the world. Not surprising, this, as the album offered a boundlessly fresh perspective by honoring the ancient past: specifically, the oft-unjustly-derided "symphonic black metal" subgenre, which back in simpler, more idealistic times was simply BLACK METAL. No matter what appellation you put upon it, Netherstorm radiated a spellbinding magick that was impossible to deny. The past was alive, with VARGRAV lighting the way...

And now, V-Khaoz returns to quickly eclipse that feat with VARGRAV's second album, Reign in Supreme Darkness. Ever aptly titled, Reign in Supreme Darkness is essentially an intensification and consolidation of Netherstorm's most enduring traits, expanding the band's lexicon by basically speaking it more boldly than before. Still a swarming, densely layered maelstrom of medieval majesty and moonlit madness, here VARGRAV heightens the drama that's latently laid at the band's core, focusing the attack into more finessed form, and stripping away some of its predecessor's more blizzard-blown excesses. In their stead arrives a more dynamic approach to songwriting, varying tempos while maximizing movement, and an overall more mournful and mysterious aspect to the prominent layers of synth.

Just as timeless as Netherstorm, if not more so, VARGRAV once again evokes the visionary works of old Obtained Enslavement, Dimmu Borgir, Abigor, Limbonic Art, and especially early Emperor. And once again, another classic of symphonic black metal graces the purple-velvet landscape of our imagination, and it bears the justifiably arrogant title of Reign in Supreme Darkness.

MAZE OF COFFIN Goblet of Perdition

Albez Duz - The coming Of Mictlan