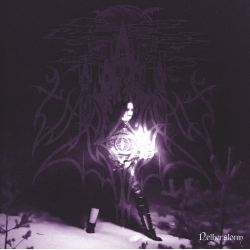 WEREWOLF RECORDS is proud to present VARGRAV's highly anticipated debut album, Netherstorm. Hailing from the Finland, the band originated during starless nights in late 2015. As the vision calmly evolved and the cloak of obscurity relinquished, VARGRAV was chosen to be illuminating sign for this act of black arts. During the formative years, the music also transmitted into a profound abyss, only to reincarnate as a sinister glow of the black flame. A demo version of the album was then unleashed during the summer of 2016, and after numerous contacts from different labels, WEREWOLF RECORDS was immediately chosen to be the most suitable collaborator with which to work.

That album, now bearing the ominous and apt title of Netherstorm, is a blizzard-blown blast from the ancient past. "Symphonic black metal" may be a dirty word to some still, but back in simpler, more idealistic times, that appellation bore delicious fruit, and many long-cherished classics of the black metal canon have upheld that banner; more specifically, once upon a time, it was simply BLACK METAL. VARGRAV bear witness to this fact, and create a swarming, densely layered maelstrom of medieval majesty and moonlit madness. Tangibly physical without sacrificing the finer nuances of synth layering, Netherstorm sweeps grandly across a cobwebbed landscape, distant ruins becoming the very listener's landscape. It's truly timeless magick, evoking the visionary works of old Obtained Enslavement, Dimmu Borgir, Abigor, Limbonic Art, and especially early Emperor, whose "Ancient Queen" is covered on the bonus 7" which comes with the vinyl LP pressing of Netherstorm. The overture of a black-hearted storm has been sung and what has yet left uncovered shall be conquered...