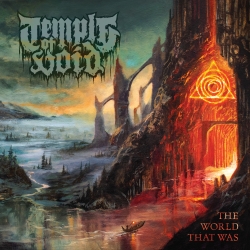 TEMPLE OF VOID - The World That Was CD

SHADOW KINGDOM RECORDS is proud to present TEMPLE OF VOID's highly anticipated third album, The World That Was, on CD, vinyl LP and cassette tape formats.

It was but the summer of 2017 when TEMPLE OF VOID unleashed upon the world their second album, Lords of Death, through SHADOW KINGDOM. Presciently titled, Lords of Death catapulted the Detroit quintet onto the radars of everyone in the underground and above - not for nothing, as this critically acclaimed second album saw TEMPLE OF VOID elevate the doom-death idiom most masterfully, even more so than their cult debut album, Of Terror and the Supernatural, which SHADOW KINGDOM reissued to a worldwide audience in 2015, two years after its initial release. But, like all masters, satisfaction is the death of desire, and hereby do TEMPLE OF VOID strive to eclipse their past (monumental) accomplishments with LP#3, The World That Was.

Graced by unforgettable cover artwork courtesy of Adam Burke, The World That Was takes the listener on the most cohesive journey TEMPLE OF VOID have crafted to date. From that cover art featuring five figures sailing down the river into the gaping maw of a fiery mountain temple, being led by Charon, to the sequencing of the tracks, ending in the epic, nearly 10-minute title track, The World That Was is a winding, windswept landscape dotted with surprising twists and turns, much of it unexpected territory whilst undoubtedly feeling very much like classic TEMPLE OF VOID. Whereas the band's first album skewed more doom and the second more death, The World That Was seemingly slots in between the two poles, mountainous as ever. More accurately, the scales perhaps might tip more "doom" here, but the manner in which TEMPLE OF VOID express that doom has definitely broadened: they're proudly a doom-death band, but on evidence of this third album, they're painting with even more colors in their no-less-crushing palette.

Of note within that palette are the synths and sound design employed across The World That Was, collectively/alternately provided by Omar Jon Ajluni, Meredith Davidson, and Alex Awn. These synths add a cohesion and depth to the album that truly makes it more cinematic and atmospheric whilst not once lessening TEMPLE OF VOID's heavyweight aspect. Granted, synths have featured on every TEMPLE OF VOID album, but their incorporation/synthesis here reflects a maturity and refinement of atmosphere that eclipses anything the band have done before.

Perhaps most revealingly, TEMPLE OF VOID's pool of influences have shaped this bold refinement. As Alex Awn explains, "This album sees a considerable outside influence from the likes of Alice in Chains, Failure, Pearl Jam, and Ride. However, don’t expect to hear these bands creep up overtly. This is still very much a death-doom record; there’s no U-turn in sound. It’s just that we draw from a very deep well of disparate influences to create the unique sound that is TEMPLE OF VOID. Details, ideas, structures, tones, and chords may come from grunge or shoegaze, but we blend them and incorporate in our own way, so it never feels like a pastiche. The likes of Morbid Angel and Bolt Thrower still fuel the backbone of what we do."
And that backbone should definitely appeal to fans of Asphyx, early Amorphis, early Katatonia, Morgoth, early Paradise Lost, Hooded Menace, and of course the aforementioned Bolt Thrower. The World That Was is a frightening place to behold, so enter TEMPLE OF VOID's realm if you dare!

KULT MOGIŁ Torn Away The Remains of Dasein CD

INSULTERS - We Are the Plague CD DIGI EP Format