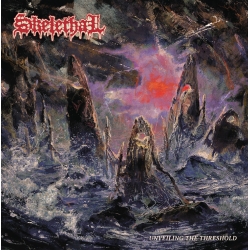 It's been like an ever-flowing stream for SKELETHAL, ever since that very first fateful spontaneous rehearsal occurring between Gui Haunting (vocals & guitar) and Jon Whiplash (drums & bass) back in 2012. While the pair initially both played with Bay Area-like devotees Infinite Translation, they instantly bonded not only over classic death metal but its Swedish late '80s/early '90s counterpart, back when that subgenre was still in its infancy yet still did reek of that unmistakable stench, away from modern trickery and trends.

Eight years later, their (malicious) intent is not only intact but stronger than ever. Yet, besides an impressive outlet of various splits and demos completed by a first proper full-length (Of The Depths…), what once was a studio-only side-project has now turned into a powerful and fully-fledged band. SKELETHAL first recruited live session members in 2014 to respond to the live demand, while Jon ended up leaving the band in November 2018 for personal reasons. Assisted by Lucas from Mortal Scepter, who became an official member after serving for over five years as lead guitarist, Gui vowed to recruit a whole lineup, recruiting first Julien on bass and then Lorenzo Vissol from Schizophrenia on drums. By January 2019, the "new" SKELETHAL started working on the forthcoming second album.

Preceded by the demo-cum-proper-EP Antropomorphia, whose title track has actually been rerecorded here, Unveiling the Threshold succeeds in both staying true to its historical roots – you’ll be easily forgiven if you first think you’ve stumbled into an unreleased Hetsheads or Carnage demo – while going beyond the simple and now too-limited Swedeath tag. Way beyond.

Wasting very little time with its opening salvo "Sidereal Lifespan," the album first grabs you by the throat before circling the listener like a vulture. They may still tread on the left-hand path, but besides resurrecting a certain idea of the underground – some may say "true" – that seemingly disappeared back in 1991, it’s actually how genuinely evil and undiluted their death metal is that’s most striking about Unveiling the Threshold.

Mostly written by Gui, with contribution by Lucas – who came up with all the music for "Adorned With The Black Vertebra" and helped co-write "Repulsive Recollections" – yet with all four members pitching in for arrangements, the whole album was ironed out throughout 2019. To keep it raw, they opted to record everything by themselves in their rehearsal room in Tourcoing, nearby Lille, in France before handing the result over to Greg Wilkinson from the now-(in)famous Earhammer studios (Necrot, Undergang, Acephalix, etc.) for the mix last June.

Indecent and obscene, rounded by a colorful yet on-purpose cryptic and ominous artwork perfectly illustrating its title by the one and only Eliran Kantor (Bloodbath, Hate Eternal, Athiest, etc.), Unveiling the Threshold is the proof that SKELETHAL are not here to crawl, but to climb to the very top of the Swedeath food chain. Beware! (text by Olivier Zoltar Badin)

Wishmaster “Far Away from the Sun” 7” EP