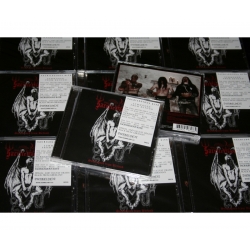 SACRILEGIOUS RITE Summoned From Beyond

Although a seemingly brand-new name, SACRILEGIOUS RITE's history stretches back to the '90s, when the band was formed following the breakup of Captis Damnare, who were active from 1999-2010. The remaining members Sumnor Amdis and E.I.-M. moved on to take a new path matching their interests and visions more than Captis Damnare ever did or could do. Their possibilities were limited, although there was inspiration, for sure. Infernal Beast, the drummer, left the band after a year. Throughout this timespan, some songs were recorded and a few gigs were played. This lineup recorded that songs that comprised the split releases with the German black metal legends Ungod and Bolivian cult Bestial Holocaust.

After Infernal Beast dropped out of the band, a lot of experiments with the lineup were undertaken - without any success. For a while, SACRILEGIOUS RITE went on hiatus because E.I.M. lost interest in being a musician for a while and Sumnor Amdis went to work on his other projects. On the edge of disbanding, a new drummer was installed. Sitrom Rogir came at the right time, bringing just the right amount of passion and fanatism to the table to get the band going again. Again, some concerts were played, and Angra Mainyu, former bassist of Captis Damnare, joined the band in the vacant position on bass. At last, the lineup was complete. The now-quartet eventually recorded the demo Black Curses of Death and the tracks for the split CD with GOATBLOOD and Dethroned.

With their lineup solidified and a number of live gigs under their bulletbelts, SACRILEGIOUS RITE hereby present their first full-length. Aptly titled Summoned From Beyond. A work of both grimy physicality and mystical aura, SACRILEGIOUS RITE fully embody the ancient spirt of black metal's yesteryears. By no means "retro"-minded nor completely against regressionism, the quartet conjure a pulsing bestiality cloaked in fog and sulfur, nodding as much to the early '90s Greek scene as they do South American wildness from the '80s. However, solid songwriting reigns supreme across Summoned From Beyond, and each of the eight central tracks (notwithstanding the mood-establishing intro and outro) patiently unfolds to envelop the listener in an orgy of vociferous violence and malignant majesty. Suitably, the recording balances robust rawness and lingering mystery alike, rivetheaded abandon and opaque splendor in equal measure. Further intensifying that orgiastic sensation, the album features a number of guest vocalists: INFERNAL EXECRATOR's Lord Ashir on "Sacrilegious Rite," Adaestuo's Hekte Zaren on "Remains of the Deceased," and Bestial Holocaust's Sonia Sepulcral on "Strigoicia."

The past is alive, and it's been Summoned From Beyond by SACRILEGIOUS RITE!

Horrid ‎- Beyond The Dark Border

Trauer - A Walk into the Twilight