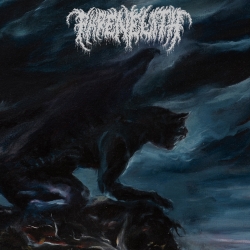 Zapytaj o produkt Poleć znajomemu Specyfikacja PDF
Since their formation in the dying days of the year 2013, Phrenelith have established themselves as a menacing force on the contemporary death metal scene. Dwelling in the dark pits of Copenhagen, the band honed their deadly craft, releasing a wealth of well-received demos, splits, and EPs. These primitive outbursts led to the release of their debut album, Desolate Endscape, in 2017, which has earned them much renown and praise, further solidifying their place in underground death metal. Furthermore, that debut album took them to far-flung corners of the world, allowing them to tour extensively in Europe and North America, and make festival appearances at Maryland DeathFest and Asakusa DeathFest in Japan among others.

Several years having passed since the conception of their monumental debut album, Phrenelith have been slowly conjuring up new material, which has culminated in the creation and recording of a new full-length that will soon be unleashed upon the world. Titled Chimaera, Phrenelith’s second album comprises seven songs of bludgeoning death metal, with lyrics heavily inspired by the darker terms of Greek mythology and shows a horrid-yet-familiar visage. While delving into new and uncharted musical territory, incorporating new refining elements, Phrenelith’s attack is accompanied by the downtuned darkness and death-rattling emissions that the band is known for. Truly, it is not hyperbole to suggest that Chimaera eclipses the expansive horror of Desolate Endscape.

Fully befitting this accomplishment, Chimaera is completed with cover artwork by the late/great Timo Ketola, while mixing & mastering were handled by Greg Wilkinson, who’s worked with Autopsy, Vastum, Necrot, Ossuarium, Undergang, and Fetid among many others (recording took place in Denmark’s Studio Ballade). As another cursed year draws to a close, Phrenelith looms ominously over all!