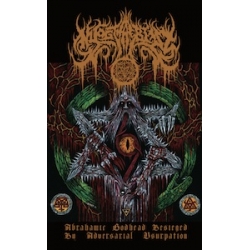 Zapytaj o produkt Poleć znajomemu Specyfikacja PDF
One of the most talked-about and divisive bands currently going in the metal underground, NYOGTHAEBLISZ patiently built a discography of incendiary short-length releases, each one bolder and more savage than its predecessor. Truly, there are few other sounds around as unique and illuminating as theirs - an endless vortex of chaos magick, in-the-red frequencies, ritualistic fervor and righteous fury. Now, some 17 years since their formation, NYOGTHAEBLISZ will finally unleash their first full-length work, Abrahamic Godhead Besieged by Adversarial Usurpation, which is being hailed in the underground (and above) as one of the most anticipated albums of the past decade.

Few human words can accurately do this work justice. Unremittingly violent, deliriously feral, hypnotically dense, overwhelming in every sense and against all senses: NYOGTHAEBLISZ's Abrahamic Godhead Besieged by Adversarial Usurpation wields sound as a very literal weapon, and proceeds to desecrate and decimate the listener's very last thresholds of sanity and purity. To merely call this "black metal" or "death metal" would be to flagrantly miss the point; the zealous heretics of NYOGTHAEBLISZ draw from a far grander spectrum of sound than the mien of metal, incorporating power electronics and harsh noise wall and proceeding to mulch and malform both to fit their diabolical design. Indeed, Abrahamic Godhead Besieged by Adversarial Usurpation is an album of "design," of obscene and obtuse angles up-ended and abused by multi-dimensional grind chaotically coalescing into a swirling, beyond-cacophonous swell of hyper-Satanic hysteria. Metaphysical mayhem begets daemonic illumination - a conflagration for insurrection, and thus liberation.

For many years, few bands approached the smothering intensity of NYOGTHAEBLISZ. Now, after Abrahamic Godhead Besieged by Adversarial Usurpation, none will be able to eclipse their revolutionary artistry and sheer uncompromising spirit. Here stands a new monument, a veritable modern classic in the making.