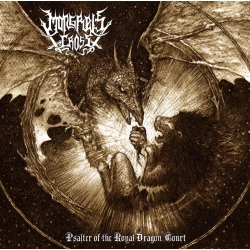 Zapytaj o produkt Poleć znajomemu Specyfikacja PDF
Hailing from the extreme metal hotbed of Australia, MONGREL'S CROSS are one of the best-kept secrets Down Under. Mind you, the band - now pared down to a duo - have been quiet since the release of their HELLS HEADBANGERS debut album, The Sins of Aquarius, in 2012, but those years away from the prying eyes of the metal public have paid off in spades on Psalter of the Royal Dragon Court. Here, these hooligans take everything that made The Sins of Aquarius so grimily gratifying - the widescreen span of filthy thrashing, down-tempo war-marches, and epic metal grandeur alike - and render it all the more terrifying and triumphant through clear 'n' cutting production. It's the age-old axis of form meeting content, and rarely has a metal record this cleanly produced sounded so threatening, which simply underlines the powerful panache to the band's strong songwriting.

Taken another way, with Psalter of the Royal Dragon Court, MONGREL'S CROSS step deeper into territory that's entirely their own. Not for them the over-generalization of "Australia = war metal" nor the simplistic connotations associated with such; no, the duo are at the height of their compositional powers and are now truly a great extreme METAL entity. All the drama and danger, legendry and lawlessness, power and poison, and essential OTT abandon of this artform otherwise known as heavy metal: everything is played out with a palpably physical poetry across Psalter of the Royal Dragon. Suitably, its lyrical themes range a rich panoply of occultism - among others, such titles as "Vessel of Shar On," "Neurian Transformation," and "Derkesthai - Initiation (to see clearly)" should suggest plenty - making this a thoroughly engrossing experience deserving of the band's elevated standards.

When so much metal aims so low, for such no-hope ghettoization, it's down to true mavericks like MONGREL'S CROSS to lead the intrepid to illumination. Hereby, open the Psalter of the Royal Dragon Court!

RIDE FOR REVENGE The king of snakes LP