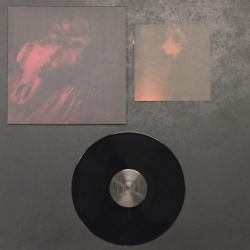 (Description by J. Campbell)
Grave Upheaval’s debut LP is far more than a mere extrapolation of the work featured on the band’s exceptional 2010 demo and its two subsequent split EPs. Listening to this LP cannot be a passive experience; Grave Upheaval constructs an environment within which the listener is subsumed. The tracks on this album are ominous and oppressive. Inverted tempos and deliberately washed out production contribute to the creation of what may arguably be the most atmospheric Death Metal album to date. Stylistically, Grave Upheaval belongs to the camp of Australian bands that includes Portal, Impetuous Ritual, and their progeny. While those bands tend to exhibit a certain technical virtuosity that occasionally renders the music uncomfortably abstruse to more orthodox listeners, Grave Upheaval revel less in technicality and more in the cavernous darkness of impenetrable walls of repetitious and discordant guitars. The accentuation of ambience rather than technique is Grave Upheaval’s greatest strength and makes the music immediately arresting to the listener without the need to engage in repeat listens before it even begins to set in. The songwriting and performance on the album is primal and severe, while the exquisitely disorienting haze in which the songs are drenched produces a hallucinatory effect. Forms emerge and retreat into the sonic miasma producing a textural richness rarely achieved in Death Metal. As with the band’s prior releases, the presentation and conceptual underpinnings of the band’s work are obscure – alluring, but always remaining just out of the reach of cognition. The album and the tracks on it are nameless and the photographic artwork adorning the release is evocative and abstract.