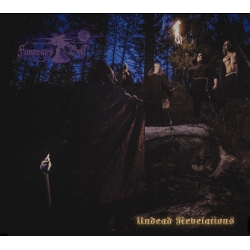 Saturnal Records is proud to announce the world wide release date for Finnish black heavy metal cult FUNERARY BELL’s sophomore album ”Undead Revelations” for 23th February 2018. Expect nothing more than old school metal vibes mixed with horror and occult in the form of black heavy metal of death!
It has been couple of years since the release of acclaimed ”Graveyard Séance” EP and the Finnish black heavy metal cult FUNERARY BELL returns with their anticipated second full-length album aptly titled for ”Undead Revelations” to redeem the dark promise given with predecessor!

The band has always drawn their inspirations from old school metal ever since their debut EP ”The Second Manifestation” that saw the day of light in 2009, yet now with ”Undead Revelations” the band has embraced a whole new level of old school atmosphere with very strong touch of classic heavy metal sound that has been assimilated together with their distinct blend of black and death metal sound they are known for. Lyrically and thematically their ethos draws from horror, mysticism and occult which all together comprises brazen and relentless black heavy metal!

FUNERARY BELL was founded in 2007 when idea of performing heavy and primordial black metal was materialized from the thoughts of moniker INVOKER OF THE SHADOWS. The first compositions were performed in solitude the same year and a release titled ”Heksakosioi Heksekonta Heks” was released. In 2008 songs from the demo tape were re-recorded and rearranged into a split release with contemporary black metal act BLOOD RED FOG.

In 2012 the band got full line-up for the first time in the band’s history which led into first live appearances which granted the band a reputation of fierce and mystic live band.

With new line-up, the band recorded a cassette EP ”Horrific TransCosmic Overture” which was first conducted as a self-release, but then re-released by Serbian metal label ODMETNIK later on.

In 2014 FUNERARY BELL signed to SATURNAL RECORDS first for the release of ”Graveyard Séance” EP that was released year after in 2015. The band started working on anticipated second full-length album in the BLACKVOX STUDIO during the year 2017 which was destined to be released in 2018.

Hermodr / Is - When the Frost Has Stopped the Time