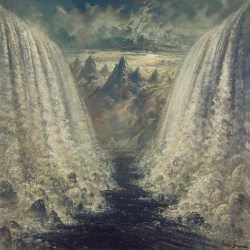 Zapytaj o produkt Poleć znajomemu Specyfikacja PDF
The tenth album in the band's career and the successor to "We Owe You Nothing" three years ago received the cover by Paolo Girardi (Power Trip, Bell Witch, Inquisition). It is a painting specifically painted for the new album.

In a long commentary, the band referred to the work on the album, expectations for music and lyrics: "Nihilistic Estrangement is our tenth album that opens a new chapter in the band's career and possibly a new trilogy. It sounds different from our previous album. The concept behind it. recording, it's a desire to break away from all the current trends, both in terms of style and production. We recorded it like old albums were recorded forty years ago. Musically, the album is reminiscent of all our achievements so far, including the first albums we recorded. It's very refreshing and personal. It's the pure essence of Forgotten Tomb. things, and for the most part to mental isolation from the modern world about participating in what is happening around us and finding solace in the inner world that no one can enter. They are very misanthropic, even if the term has grown old in recent years. "

The FORGOTTEN TOMB tour is planned for May. The band will headliner with Vanhelg (SWE) and Totalselfhatred (FIN).
FORGOTTEN TOMB - Nihilistic Estrangement (Official Album Stream)

Vargsang - In The Mist Of Night