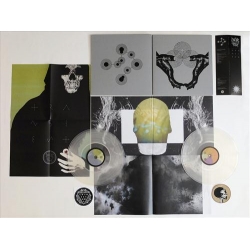 Among the most highly anticipated releases on NWN! for 2015 is the debut full length release by Chaos Echoes. Announced in fall of 2014, the band worked painstakingly on both the musical and visual presentation for “Transient,” and NWN! is honored to announce that it is finally complete. Deriving their name from the last album by their predecessors, Bloody Sign, Chaos Echoes established themselves as France’s masters of Avant Garde Death after quietly releasing a series of EPs featuring the band’s characteristically unorthodox material. Combining magnificent complexity, an exceptionally high degree of musicianship, and a distinct sense of experimentalism, Chaos Echoes is among the most captivating bands in the underground – a band truly incapable of simple categorization. “Transient” reflects the culmination of Chaos Echoes’ work to date. The album is undeniably unique, yet also firmly rooted in the spirit and substance of metal. It is not the product of outsiders peering into and misappropriating metal elements in the service of some impotent simulacra; rather, “Transient” reflects Chaos Echoes’ deep reverence for Death Metal, their passage through the depths of the genre, and the band’s emergence from its depths to peer beyond. The album is meant to be absorbed as one continuous experience as each of the tracks blends seamlessly into the next.  Continuing with the pattern developed on previous releases, the more focused and aggressive tracks on “Transient” are held together by the threads of long, ritualistic, and haunting tracks presented in sequence and referred to, in Burroughsian fashion, as “Interzones.” While the album is rich with an atmosphere of intentional experimentation, the focused intensity of tracks such as “Advent of my Genesis” and the frenetic ecstasy of the climactic closing track, “Soul Ruiner,” reveal the detailed composition and calculated precision of “Transient.” As with all of their previous recordings, the music is the undeniable focus of the release, but it is not intended to be regarded in a vacuum; rather, Chaos Echoes puts nearly as much emphasis upon the accompanying visual content (created by Chaos Echoes bassist and accomplished visual artist, Stefan Thanneur).  “Transient” is, by far, the most visually ambitious release in Chaos Echoes’ catalog. Accompanying the LP is a 20-page booklet featuring artwork created specifically as an extension of the band’s sonic explorations. Regarded as a whole, “Transient” is unlike any other metal release to date. A perfect synthesis of conservative reverence for tradition and iconoclastic novelty, Chaos Echoes accomplishes with this album something that, arguably, no band has ever successfully done before.