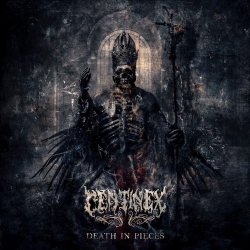 Swedish classic death metallers CENTINEX have announced a new album, "Death In Pieces". The record will be released on May 29 via Agonia Records.

CENTINEX has been around since 1990. The band broke up in 2005, releasing eight albums in total. In 2014 he returned to the stage with a refreshed line-up and a new recording, "Redeeming Filth". Soon after, he released another album, "Doomsday Rituals" (2016), which entailed appearances in Europe and the United States (including the Maryland Deathfest). "Death In Pieces" is the band's third album after reactivation. The disc is characterized by the dominance of riffs characteristic of CENTINEX, woven into the death metal of the old Stockholm school.

This is what the band commented on: "We're excited to finally release the new album! As many of you may have noticed, we've been keeping a low profile lately. It has been for a variety of reasons. Finally, we're back on our course with a very intense and brutal work. and also with a new line-up, hungry for death metal! ".

"Death In Pieces" was recorded by CENTINEX and Johan Hjelm at Wellbay Studios. Mixing and mastering is due to Ronnie Bjornstrom from Enhanced Audio Productions (Aeon, Bodyfarm, Meshuggah). The cover was prepared by Bahrull Marta.
CENTINEX - Death In Pieces (Official Album Stream)

Arrogant Destruktor - Amidst the Blackest Void