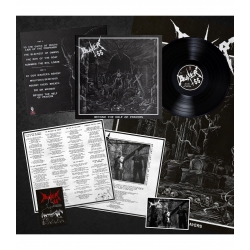 BUNKER 66 Beyond the Hep of Prayers LP

Since 2007, Italy’s BUNKER 66 have been proudly (and prolifically) flying the flag of ‘80s metalpunk, all in the beloved power-trio format. Of course, the joint influence of Motörhead and Venom looms large, but equally so do homeland heroes Bulldozer, the UK’s Warfare, early Running Wild, early Bathory and Slayer, later Anti-Cimex, metal-era Gang Green, and any ‘80s recordings from Discharge and Exciter. With this robust and rust-covered foundation firmly in place, BUNKER 66 recorded a trio of cult albums for High Roller Records as well as a grip of splits with the likes of Italy’s Barbarian and Morbo, Brazil's Whipstriker, and most recently Scotland's Vuil. Simply put, they’re a cult band for cult fanatics – and we wouldn’t have it any other way!

Now, a couple years on from that last-mentioned split with Vuil comes BUNKER 66’s long-awaited fourth album, Beyond the Help of Prayers. The band’s first full-length in four years and second with the lineup of co-founders vocalist/bassist Damien Thorne and drummer Dee Dee Altar alongside ex-Schizo guitarist J.J. Priestkiller, Beyond the Help of Prayers is a refreshing blast of old air! Right from the opening, galloping minutes of “To the Gates of Death – Lair of the Profaner,” this is 666% BUNKER 66 through and through – all those above influences, all sliced and diced with the deft touch of devotees, but always brimming with a charisma that’s undeniable – and thereafter do the hits keep on coming. But, while one could say that Beyond the Help of Prayers is business as usual for the band (and we’d still love it), the album sees BUNKER 66 taking on subtly more epic touches, ones that feel almost swords & sorcery without being obvious about it, or perhaps the post-apocalyptic wasteland vibes of Dee Dee Altar’s time in Children of Technology played a significant role? Naturally, the trio keep their noses deep within their realms of the black here, and while they’re undoubtedly dirtier and more blasphemous than ever, BUNKER 66 arguably receive their best-sounding production on Beyond the Help of Prayers, which thankfully only maximizes their power that much more.

You can’t teach old dogs new tricks, and the same be said – STUNNINGLY – for BUNKER 66, for they’re Beyond the Help of Prayers!

IMMEMORIAL CELTIC WIND Call From The Ancient Past 94–95 LP

Root - Madness of the Graves