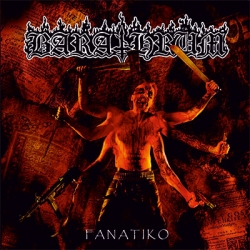 BARATHRUM is BACK! The brand new album of BARATHRUM, titled FANATIKO!

One of the founding fathers of Finnish black metal, formed in 1990, have finally forged a long-anticipated full-length album. 12 years since their last release was out, which many thought to be their last, BARATHRUM strikes again, setting the new beginning for this primordial beast.

The demonic pack led by the one and only DEMONOS SOVA have forged 8 brand new incantations, going all the way back to the roots to make their phoenix-like rebirth. The album was recorded fully on the analog equipment in BLACKVOX STUDIO, like the Barathrum’s first albums in 1990s were made, bringing back the trademark raw, untamed demonic energy. Same doomish vibrations and rocking black metal sounds which made the name for BARATHRUM in times when INFERNAL and LEGIONS OF PERKELE albums were made, will be brough back in a zealous whirlwind of FANATIKO.

Expect nothing but old school black metal sound mixed with hellfire and demonic ichor, which will be spilled out by now-6-piece orchestra. As on the earlier works, trademark BARATHRUM sound is executed with 2 bass guitars, which was almost unheared back in the days – but today on FANATIKO BARATHRUM is even more dangerous and blasphemous than ever!

SOLIUM - The Styx is Witching Me, CD digipack

Departure Chandelier - The Black Crest Of Death, The Gold Wreath Of War CD

ACHERON - Rites of the Black Mass