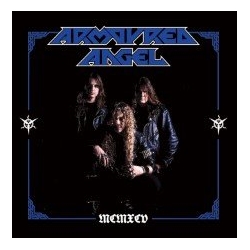 Zapytaj o produkt Poleć znajomemu Specyfikacja PDF
All copies pressed on blue vinyl with silkscreened artwork on side B.

As longtime fans of the band, HELLS HEADBANGERS is proud to present a special vinyl pressing of ARMOURED ANGEL's Demo MCMXCV. Formed in 1982 and disbanding in 2001, ARMOURED ANGEL were Australia's very first extreme metal band - and for many years, one of its only ones. Originally released in 1995 on cassette tape, Demo MCMXCV was indeed a demo for what was to be the band’s debut album. Most interestingly, this four-song recording was done with none other than Killing Joke's Jaz Coleman, who lent a strange-yet-sympathetic ear to ARMOURED ANGEL's idiosyncratic style of largely mid-tempo death metal. Perhaps it was Coleman influencing the trio or the other way around, but Demo MCMXCV maintains a certain buoyancy, an almost hovering aspect, which renders their characteristic crunch even more hummable than before – and no amount of power nor poignancy is sacrificed in the process. And the demo closes in dramatic fashion with the swirling "Oriax," arguably one of the best goth-metal songs never heard…if goth-metal was as heavy as a tank. Alas, these recordings never blossomed into ARMOURED ANGEL's long-awaited debut album, which would emerge in 1999 (and with a different producer) as Angel of the Sixth Order, but Demo MCMXCV is an extremely fascinating snapshot of "what could have been" and a crucial piece of the band’s canon. HELLS HEADBANGERS will now release it on 12" vinyl for the first time ever, with silkscreened art on Side B.